Fen is the first stage of change when open water becomes woodland. 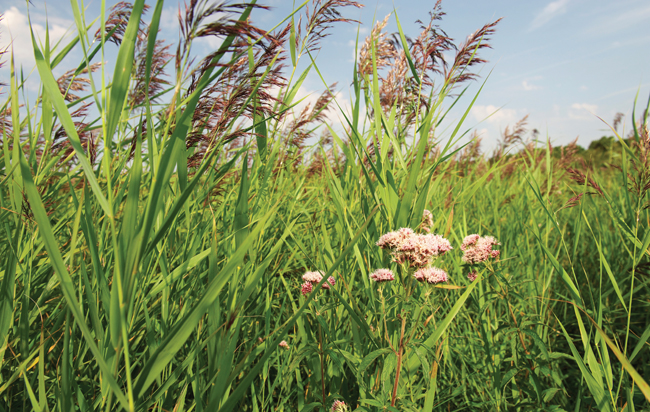 Fens are water-logged areas of land dominated by reeds, rushes and sedge with a complicated system of plant and animal communities.

Although there was a significant loss of  fen to woodland during the last century, the Broads still boasts around 1700 hectares of wildlife-rich open fen. That's the largest expanse in lowland Britain. You can read more about fen wildlife here.

Because the fens of the Broads support such an abundance of rare species, many of which cannot be found elsewhere in Britain, we work in partnership with Natural England, landowners and managers to maintain and, in some cases, restore lost fenland. The Fen Management Strategy was developed in 1997 and is still used to inform and coordinate this work along with the 2004 supplement and Fen Audit.

Our fen management handbook is aimed at anyone involved in fen management, creation or restoration from a practical, policy or planning perspective. It highlights practical techniques while outlining the science which underpins them.

Restoring wet and often treacherous places invaded by scrub and woodland is something of a technical challenge. Large machinery can become stuck and damage this fragile environment.

Cutting and clearing scrub by hand is still done by Broads Authority volunteers. For some sites it is the only workable option but it is extremely labour intensive so we now have specialist equipment like low ground pressure excavators, fen harvester machines and portable incinerators designed for larger scale scrub removal.

We have also created turf ponds to restore fen habitat. These shallow peat diggings were carried out in Victorian times to provide peat for fuel or to improve the quality of the reed and sedge harvest but when left to recolonise they proved a rich source of diverse vegetation. Today the most species-rich areas tend to be found where turf ponds were once dug. You can read more in the turf pond analysis report and summary conclusions.

All fen restoration projects leave a proportion of scrub to provide singing, roosting and nesting areas for birds and important habitat for invertebrates. We have been involved in two partnership projects to restore habitats for the bittern - one at East Ruston Fen and a more recent project on land next to How Hill National Nature Reserve, now known Buttle Marsh.

Other birds such as the marsh harrier have made a successful comeback in response to improved fen management in recent decades.