Reed and sedge has been harvested from the Broads fens as part of a lively rural economy for centuries.

But at the turn of the 21st century this once important industry was dying with only around a dozen cutters remaining, more than half of whom were close to or already beyond retirement age. 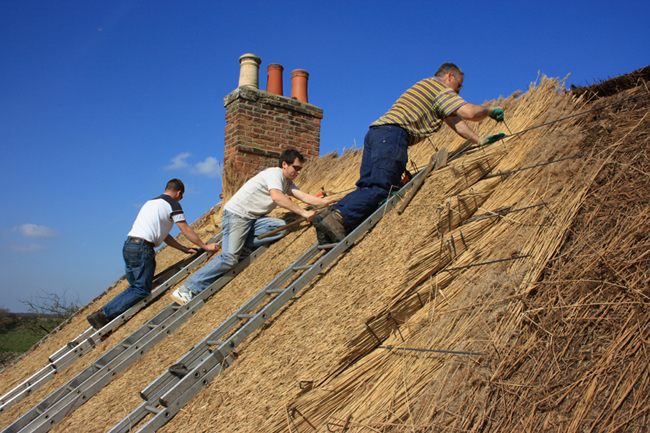 It took the will of the remaining reedcutters with the help of the Broads Authority to revitalise the industry and since the end of 2002 it has turned a corner and is now stable and recovering with new, younger people cutting double the area.

How reed and sedge are cut

Mixing old and new skills and resources, reed and sedge cutters now largely use pedestrian-driven reciprocating mowers to harvest their crop. Bundles are then tied and removed from site, sometimes by boat, ready for sale to local thatchers.

Although commercial cutting can remove large areas, many sites are cut in small patches, often avoiding very wet or unstable parts so that some tall vegetation is left standing as habitat for associated plants, insects, birds and mammals.

Cutting reed every two years in rotation is favoured for conservation to provide refuges for birds and invertebrates while sedge is cut every four or five years.

The modern-day renaissance began in summer 2002 when we commissioned an investigation into the decline of the industry and the feasibility of its rejuvenation.

While some people felt this decline was inevitable due to the arduous nature of the work and the cheap price of imported reed, the remaining reedcutters maintained that a relatively small amount of money could reverse it and that enough young people could be drawn into learning this skill.

Measures of success include new younger people becoming reed and sedge cutters and an increase in the area of fen managed commercially from 200 to 400 hectares, which is approximately a quarter of the Broads fenland.

While any form of land management has its challenges, the advantages of commercial cutting are numerous.