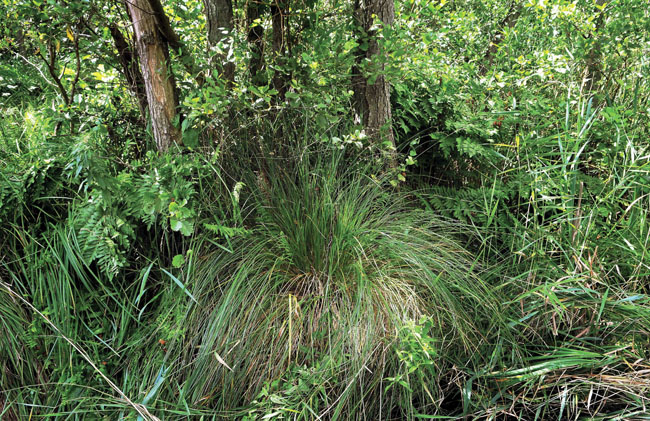 When a fen is left unmanaged small shrubs and trees may start to grow, leading to the natural creation of carr woodland.

There are around 3,000 hectares of woodland and scrub in the Broads, one third of which has developed within the last 50 years.

The most valuable areas of carr woodland in the Broads are those which are mature, rather than former fen areas which have been neglected and turned to scrub. Mature carr woodland is a largely undisturbed wilderness - a tangle of woody species, shade-tolerant herbs and lower growing plants.

Apart from its ecological importance, carr woodland is also a characteristic feature of the Broads, giving scale and backdrop to the fens and lakes and softening the landscape.

Carr woodland is dominated by alder, sallow and birch trees, with shrubs such as guelder rose, buckthorn, dog rose and brambles. The areas are damp and shady with an abundance of ferns, mosses and liverworts, while lichen and fungi grow on branches and dead wood.

Important communities of alder trees with characteristic swampy ground conditions and large tussock sedges can also be found, often at the edges of broads.

Heronries, the traditional breeding colonies of herons, are found in areas of carr woodland. Many common woodland birds, insects and other invertebrates also inhabit these wet woodlands, contributing to their importance as a Broads habitat.

Mature carr is best left unmanaged for nature conservation but younger areas can be enhanced, particularly by coppicing trees at the edges to create a softer transition from fen to woodland.

Less valuable areas of carr woodland are those that have recently developed from neglected fens  and in some cases these can be cleared to open fen again, leaving a proportion of scrub as habitat for birds and invertebrates. Find out more about restoring fen here.